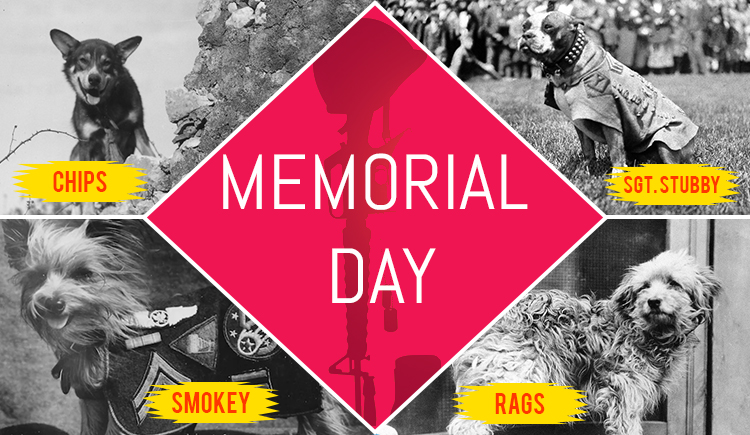 Memorial Day is a day to celebrate bravery and sacrifices of soldiers, Military War Dogs (MWDs) and each and everyone who lost their lives serving our nation’s Armed Forces. Celebrated on 28th May, Memorial Day is a federal holiday and people celebrate it in different ways. Citizens pay honor by visiting the cemeteries and decorating the graves with an American flag. But very often MWDs who sacrificed their lives for our country are forgotten. Hence, this Memorial Day, Budget Pet World pays tribute to war dogs that fought till their last breath.

Below are the images and information about 5 brave dogs that are no less than any superhero.

One of the most decorated war dogs; sergeant stubby saved a girl from a car, captured a German spy and also alerted soldiers of a gas attack. The Pit Bull also showed fortitude and survived poisonous gas and grenade attack. The valiant dog died in 1926 and his corpse was kept by Smithsonian museum. 1943, during the invasion of Sicily, a German shepherd/Collie/Husky mix, Chips single-handedly attacked the gunmen who were firing at him and his handler with a machine gun. This brave effort of Chips made the gunmen surrender to the American army. He earned Silver Star and Purple Heart awards which were later taken back because at that time these awards were not meant to be given to dogs. Served as a mascot of the 1st Infantry Division during World War I, Rags joined in 1917 and used to relay messages from front lines; he is remembered for his heroic effort of relaying a message through falling bombs. Arguably the smallest military dog weighing only 4 lbs and 7 inches tall, smoky was an unofficial war dog found by an American soldier and sold to Corporal William A. Wynne. He saved Wynne by warning him of incoming shells. This Memorial Day, pledge to never forget the sacrifices of the heroes who fought for us.